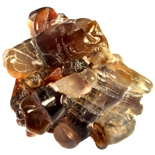 Typical Appearance: Agates are concentrically banded, shell-like chalcedony. Bands can be multi-coloured, or of the same colour. Most brightly coloured agates are dyed.

Origin of Name & Mythology: In antiquity, in many cultures it was considered a stone of protection. The name is derived from its occurrence at the Achates River in southwestern Sicily.

Agate forms when microscopic quartz crystals are deposited in layers, often banded with members of quartz, chalcedony or jasper. All Agates are grounding, calming cleansing and protective. They are also harmonising, and as such can be used to balance male-female energy, and balance the physical, emotional, intellectual and etheric planes. Agates help with self-confidence issues, improve concentration, and ease emotional trauma. There are many forms of agate with additional properties, a few of which are listed below:

Colouration due to dying. The pigment is carbon, using a concentrated honey or sugar solution, following treatment with heated sulphuric acid.
Grounds and centres, facilitates communication, helps to shift energy blocks, aids meditation, and promotes self-healing by allowing us to go to and dissipate the inner-stress causing the illness.

Blue chalcedony with layering of white quartz or jasper; it is calming and bestows optimism. Good for communication, especially in friendship, as it reflects both aspects of communication: the ability to listen and understand as well as the ability to communicate clearly.

Contains thin layers of Limonite. Fire Agate is said to make us desire to be the best we can be. It is profoundly energising, and floods us with sparkling vibrant energy, so can be an effective in the treatment of depression and Seasonal Affected Disorder - although it may be too strong in cases of debilitating illness such as ME and CFS. Used with intention, fire agate creates a protective deflecting shield around the body. Physically, it aids circulation, and can also be used to remove heat, so it is helpful in treating hot flushes, fevers, and inflammation, or other conditions caused by too much “heat” in Chinese medicine.

Banded Agate balances and calms, is good for communication and grounding, and promotes abstract creative thoughts.

Moss Agate is balancing, calming, stabilising and detoxifying. It acts as a powerful healing, anti-inflammatory and pain relieving stone, and can also be effective in the treatment of burns. Moss agate is most potent when placed directly in contact with the skin on or near the area in need of healing or pain relief. It also makes a useful elixir, which is especially beneficial for skin complaints and burns.