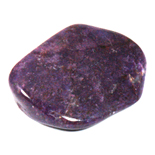 Chakra Alignment: Heart and Third Eye; Crown and Base

Origin of Name & Mythology: "Named by Nobuhide Murakami, Toshio Kato, Yasunori Miura, and Fumitoshi Hirowatari in 1976 in honor of Ken-ichi Sugi (15 May 1901, Kashiwazaki, Niigata Prefecture, Japan - 16 July 1948, Fukuoka, Fukuoka Prefecture, Japan), petrologist at the Imperial University Kyushu, who first found the occurrence of the mineral with M. Kutsuna. Sugilite is an example of a mineral name pronounced wrongly more often than correctly. Named after Japanese petrologist Dr Kenichi Sugi, whose name is pronounced with a hard ""g"" (as in ""geese""), whereas most english speakers mispronounce it with a soft ""g"" (as in ""gene""). This wasn't much of an issue when sugilite was just an obscure ugly greenish-yellowish-brown rock-forming mineral from Japan, but when it was found in South Africa as large quantities of bright purple lapidary rock and thousands of people in the gem trade started talking about it, the bad pronunciation became entrenched (Alfredo Petrov 2014)."

Sugilite is balancing, uplifting and healing, and can make us more aware of the connection between mental state and physical illness. It is said to represent perfection of spiritual love, and makes us more receptive to spiritual influences. It can balance and open all the Chakras, and attracts healing power. For those who feel discomfort or a sense of not belonging in the physical body, it can act as a reminder of why we have chosen to be here. Sugilite is excellent in meditation, and is also an effective pain reliever (due to manganese content). It can balance and reorganise brain activity, making it useful in treatment of a variety of conditions, including dyslexia, autism and mental illness.