A Brief History of Crystals and Healing

It is fair to say that as long as we have existed as a species, we have had an affinity with stones and crystals. The use of talismans and amulets dates back to the beginnings of humankind, although we have no way of knowing how the earliest of these objects were viewed or used. Many early pieces were organic in origin. Beads carved of mammoth ivory have been excavated from a grave in Sungir, Russia, dating back 60,000 years (Upper Palaeolithic period), as well contemporary beads made from shell and fossil shark's teeth.

The oldest amulets are of Baltic amber, some from as long as 30,000 years ago and amber beads were discovered in Britain from 10,000 years ago, the end of the last ice age. The distance they travelled to reach Britain shows their value to the people of that time. Jet was also popular and jet beads, bracelets and necklaces have been discovered in Palaeolithic gravesites in Switzerland and Belgium. There have been malachite mines in Sinai since 4000 BC.

Amulets were banned by the Christian church in 355 AD, but gemstones continued to play an important role, with sapphire being the favoured gem for ecclesiastical rings in the 12th century. Marbodus, the Bishop of Rennes in the 11th century, claimed that agate would make the wearer more agreeable, persuasive and in favour of God. There were also many symbolic references, such as the carbuncle representing Christ's sacrifice. 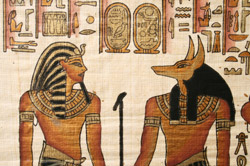 The first historical references to the use of crystals come from ancient the Ancient Sumerians, who included crystals in magic formulas. The Ancient Egyptians used lapis lazuli, turquoise, carnelian, emerald and clear quartz in their jewellery. They also carved grave amulets of the same gems. The Ancient Egyptians used stones primarily for protection and health. Chrysolite (later translated as both topaz and peridot) was used to combat night terrors and purge evil spirits. Egyptians also used crystals cosmetically. Galena (lead ore) was ground to a powder and used as the eye shadow known as kohl. Malachite was used in a similar manner. Green stones in general were used to signify the heart of the deceased and were included in burials. Green stones were used in a similar way at a later period in Ancient Mexico.

The Ancient Greeks attributed a number of properties to crystals and many names we use today are of Greek origin. The word 'crystal' comes from the Greek word for ice, as it was believed that clear quartz was water that had frozen so deeply that it would always remain solid. The word amethyst means 'not drunken' and was worn as an amulet to prevent both drunkenness and hangovers. Hematite comes from the word for blood, because of the red colouration produced when it oxidises. Hematite is an iron ore and the ancient Greeks associated iron with Aries, the god of war. Greek soldiers would rub hematite over their bodies before battle, perportedly to make themselves invulnerable. Greek sailors also wore a variety of amulets to keep them safe at sea.

Jade was highly valued in ancient China and some Chinese written characters represent jade beads. Musical instruments in the form of chimes were made from jade and around 1000 years ago Chinese emperors were sometimes buried in jade armour. There are burials with jade masks from around the same period in Mexico. Jade was recognised as a kidney healing stone both in China and South America. More recently - dating from around 250 years ago - the Maoris of New Zealand wore jade pendants representing the ancestor spirits, which were passed down many generations through the male line. The tradition of green stones being lucky continues in parts of New Zealand to this day.

Crystals and gemstones have played a part in all religions. They are mentioned throughout the Bible, in the Koran and many other religious texts. The origin of birthstones is the breastplate of Aaron, or the "High Priest's Breastplate", as mentioned in the book of Exodus. In the Koran, the 4th Heaven is composed of carbuncle (garnet). The Kalpa Tree, which represents an offering to the gods in Hinduism, is said to be made entirely of precious stone and a Buddhist text from the 7th century describes a diamond throne situated near the Tree of Knowledge (the neem tree under which Siddhartha meditated). On this throne a thousand Kalpa Buddhas reposed. The Kalpa Sutra, in Jainism, speaks of Harinegamesi the divine commander of the foot troops who seized 14 precious stones, cleansed them of their lesser qualities and retained only their finest essence to aid his transformations.

There is also an ancient sacred lapidary treatise, the Ratnapariksha of Buddhabhatta. Some sources state that it is Hindu but it is most likely Buddhist. The date is uncertain, but it is probably from the 6th Century. In this treatise diamonds figure highly, as the king of gemstones and are ranked according to caste. The Sanskrit word for diamond, vajra, is also the word for the Hindu goddess Indra's thunderbolt and diamonds are often associated with thunder. The ruby was also highly revered. It represented an inextinguishable flame, and was purported to preserve both the physical and mental health of the wearer. The treatise lists many other gemstones and their properties.

In Europe, from the 11th century through the Renaissance a number of medical treatises appeared extolling the virtues of precious and semi-precious stones in the treatment of certain ailments. Typically stones were used alongside herbal remedies. Authors included Hildegard von Binghen, Arnoldus Saxo, and John Mandeville. There are also references to stones with particular qualities of strength or protection. In 1232 Hubert de Burgh, the chief justicular of Henry III, was accused of stealing a gem from the king's treasury which would make the wearer invincible and giving it to Llewellyn, the King of Wales and Henry's enemy. It was also believed that gemstones were corrupted by the original sins of Adam, could possibly be inhabited by demons, or if handled by a sinner, their virtues would depart. Therefore, they should be sanctified and consecrated before wearing. There is an echo of this belief today in the cleansing and programming of crystals before use in crystal healing.

During the Renaissance the tradition of using precious stones in healing was still accepted, but the enquiring minds of the period sought to find out how the process actually worked and give it a more scientific explanation.

The Begining of Crystal Healing

In 1609 Anselmus de Boot, court physician to Rudolf II of Germany, suggested that any virtue a gemstone has is due to the presence of good or bad angels. The good angels would confer a special grace to the gems, but the bad angels would tempt people into believing in the stone itself, and not in God's gifts bestowed on it. He goes on to name certain stones as helpful, and put other's qualities down simply to superstition. Later in the same century, Thomas Nicols expressed in his 'Faithful Lapidary' that gems, as inanimate objects, could not possess the effects claimed in the past. Thus, in the Age of Enlightenment, the use of precious stones for healing and protection began to fall from favour in Europe.

In the early part of the 19th century, a number of interesting experiments were conducted to demonstrate the effects of stones on subjects who believed themselves to be clairvoyant. In one case, the subject claimed to feel not only physical and emotional changes when touched with various stones, but also to experience smells and tastes. 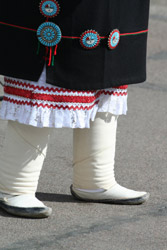 Although no longer in use medicinally, gemstones continued to hold meaning. Until recently, jet was popularly worn by those in mourning, and garnet was often worn in times of war. There is a tradition in a local family here in southwest England: every female descendent wears an antique moonstone necklace for her wedding, which has been in the family for generations. It was only recently that one family member realised this was a fertility symbol.

Many tribal cultures have continued the use of gemstones in healing until very recently, if not through to the present day. The Zuni tribe in New Mexico make stone fetishes, which represent animal spirits. These were ceremonially 'fed' on powdered turquoise and ground maize. Beautiful inlaid fetishes are still made to sell, and are very collectable artefacts or sculptures, although the spiritual practise surrounding them is no longer much in use. Other Native American tribes still hold precious stones, especially turquoise, sacred. Both Aborigines and Maoris have traditions regarding stones and healing or spiritual practise, some of which they share with the rest of the world, while some knowledge still kept private within their communities.

It is interesting to note that there are many examples of gemstones meaning similar things to different cultures, even when there has been absolutely no interaction between these cultures, and no opportunity for crossover. Jade was considered to be a kidney healing stone by the ancient Chinese, and also Aztec and Mayan civilisations, turquoise has been worn to give strength and health all over the world, and jaspers have almost always conferred both strength and calm.

In the 1980s, with the advent of the New Age culture, the use of crystals and gemstones began to re-emerge as a healing method. Much of the practise was drawn from old traditions, with more information gained by experimentation and channelling. Books by Katrina Rafaell in the 80s, and Melody and Michael Gienger in the 90s, helped to popularise the use of crystals.

These days there are a large number of books available on the subject, and crystals frequently feature in magazine and newspaper articles. Crystal therapy crosses the boundaries of religious and spiritual beliefs. It is no longer viewed as the domain of alternative culture, but as an acceptable and more mainstream complimentary therapy, and many colleges now offer it as a qualification subject.